About the Center
The Donahue Rowing Center is a rowing facility located on Lake Quinsigamond and is home to many local high school and college crew teams. The buildings were built on town owned land by vote of the Shrewsbury Annual Town Meeting in 1991. 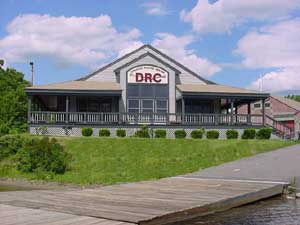 History
Groundbreaking ceremonies took place on April 24, 1992. The first shells were stored in the boathouse on December 5, 1992. Dedication ceremonies were held April 24, 1993. Final construction was completed in 1994 at a total cost of $1,074,882 with minimal cost to the taxpayers of Shrewsbury. The Donahue Rowing Center 2002 addition, which was donated, has added 4 more storage bays to the original 6 bays built in 1992. The addition was dedicated on September 27, 2002, with over 500 past and present rowers of the Donahue Rowing Center present.