Using the average household consumption figures a household currently can expect to pay $83.46 in PAY-T bags. The proposed bag fees would increase this annual amount to $124.46/year. While the recommended PAY-T Fees are greater than the selected Comparable Community averages of $1.03 and $1.95 they are in line with $1.25 and $2.21 average value of the 59 PAY-T of communities providing curbside collection across the commonwealth.These differences may be best explained by the nuances and the designed funding models of each program; for example the use of an annual fee, ranging from $80-315, in addition to PAY-T bag fees to supplement program costs.

Another valuable point of interest is the proposed fee structure impact compared to private residential service on an average household level per year. The cost of comparable private residential collection of refuse and recyclable materials would range from $442 - $576 per year. The average private service at $515 per year is approximately 4.1 times greater than the average household PAY-T bag usage at $124.46 per year. Stated alternately, $515 per year equates to disposal of 22.25 LARGE bags per week.

It should be noted that the out-year expenditures and the revenues set to meet these requirements attributed Indirect Costs in accordance Massachusetts General Laws Chapter 44 Section 53 F½ and the budgeting approaches used for the Water, Sewer, and Stormwater Enterprises in the Fiscal Year 20 budget. These indirect costs equate to an average of $62,305 per year for the enterprise or approximately $0.09 of the bag increase for both SMALL and LARGE bags. In most cases, these indirect costs are not new charges, but existing costs in the enterprise service provision. The goal is to provide a more transparent and accurate accounting of the costs to provide the service to the Town.

Shrewsbury’s PAYT program went into effect in August 4th, 2008. In the PAY-T program, residents are charged for the collection of municipal solid waste based on the amount they throw away. With the goal to create an economic incentive to recycle more, generate less waste, and reduce Solid Waste costs to both the town and its citizens.

Since its inception, Shrewsbury’s PAY-T program has endeavored to increase town wide recycling rates while reducing the Town’s financial Tax Levy burden to roughly 50% of the enterprise’s total annual budgeted. Prior to the implementation of the PAY-T program, the Solid Waste Enterprise Tax Levy requirement in 2008 was $1,691,639. The rates for PAY-T have not been raised since it's inception in 2008.

For roughly 56% of the communities across the Commonwealth, the typical municipally led solid waste program draws revenue from two main sources: property taxes, or a fixed bill amount that does not vary in respect to the amount of waste removed.This approach creates a disconnect between the cost of service and the constituent, ultimately hindering any incentive to reduce waste disposal. The remaining 154 communities such as Shrewsbury have implemented variations of the PAY-T program for this purpose.

Ten years prior to the Town of Shrewsbury’s adoption of a PAY-T program, The EPA had been promoting similar initiatives. By 2004, 110 out of 351 municipalities in Massachusetts had implemented PAY-T programs. Shrewsbury’s neighbor, Worcester, through its PAY-T program had decreased its waste management costs by $1.2 million and increased its recycling rate from 3% to 36% immediately following the program’s introduction in 1993. In fiscal years 2006 and 2007, the town of Shrewsbury’s recycling was only 20% of the total waste collected, which was significantly lower than the EPA’s 40% diversion goal.

Additionally, the low recycling rates were incurring higher solid waste expenses for the town. The Town of Shrewsbury’s trash hauler in 2007 provided recycling at no additional charge, and residents who were not recycling were in violation of the town’s bylaw.

The PAY-T program was designed to reduce budget expenses by incentivizing residents to recycle more; and the Town’s revenue generated from the sale of PAY-T bags would pay for services and offset the Tax Levy impact. Until very recently, simply increasing recycling would reduce the tonnage of trash at the curb, resulting in less spending for waste disposal. While this model inherently is still valid, it is imperative that the correct curbside recyclable materials are collected as the Town now is required to pay for the processing of recyclable materials. Recycling smart results in the best benefits to the Town, the community, and the recycling market.

Over the first three years, the Town witnessed an 11.5% increase in recycling tonnages to a total of 33.74% of the Town’s total collected curbside tonnage. From 2012 forward recycling has slowly trended downward to approximately 29.67% of the total collected curbside tonnage. This variance may best be explained by the transitioning from “wish recycling” that may have been more evident in the first years of the PAY-T program to a cleaner more marketable recycling stream. An August 2019 audit of the Town’s recycling materials revealed a 1.55% and 2.00% contamination rate for the Co-mingled and Fiber stream respectively. While there is certainly room for improvement, the Town should be encouraged and proud of these levels.

Prior to the implementation of the PAY-T program, the Solid Waste Enterprise Tax Levy requirement in 2008 was $1,691,639. Since its inception, Shrewsbury’s PAY-T program has endeavored to increase town wide recycling rates while reducing the Town’s financial Tax Levy burden to roughly 50% of the enterprise’s total annual budgeted. From FY 09 to FY 19 the average budgeted tax levy and median budgeted tax levy are calculated at $886,641 and $883,768 or 49.80% and 48.69% of the total budgeted expenditures respectively. 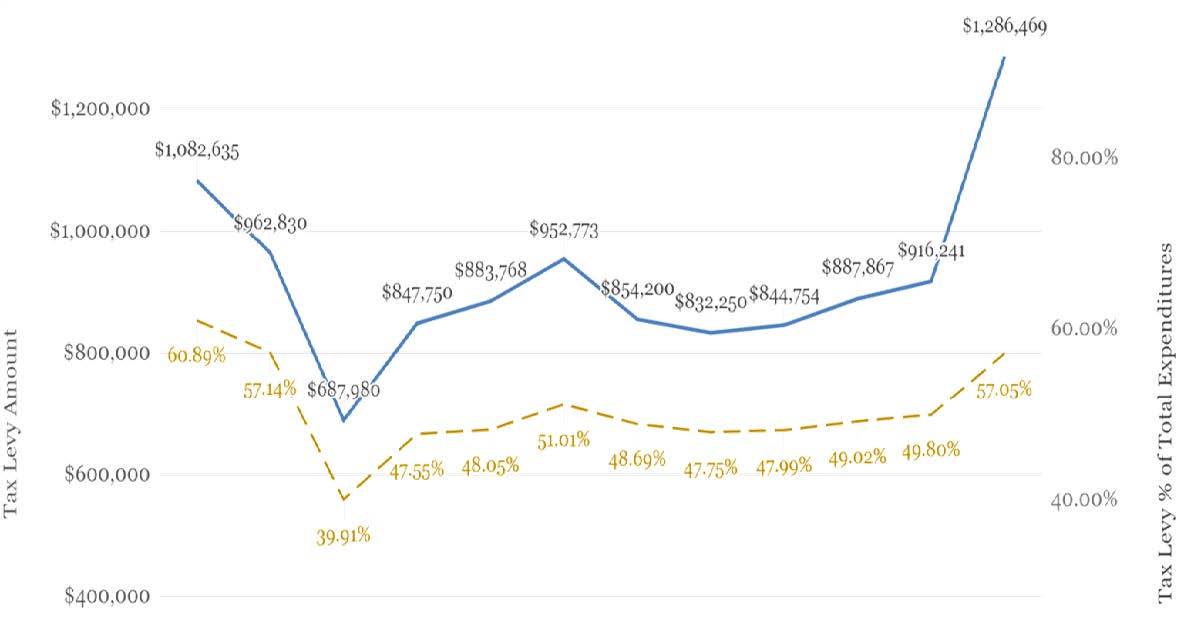